The world-renowned Fontainebleau Hotel, Miami Beach was host to the 2nd annual Revolt Music Conference this past weekend with the overall theme being “The Merging of Music, Technology, and Innovation”. This extensive four-day event encouraged those attending to interact with prominent figures in both the music and technological industry. This year’s conference included in-depth interviews and FAQ’s with industry trailblazers in their respective field, various networking opportunities, and exclusive music performances. 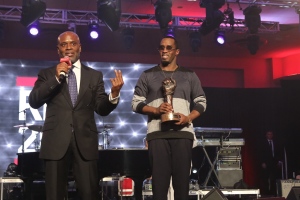 The 2015 Revolt Music Conference was officially kicked off when Sean ”Diddy” Combs (the current chairman of Revolt) was presented with the key to the city of Miami Beach last Thursday, October 15th  by Miami Beach’s Major Philip Levine. Combs had all but this to say, “I am going to use this key, so don’t be surprised if you find me in your kitchen in the middle of the night eating cereal”.  This honor was subsequently followed by a lengthy Q&A ushered by Keith Clinkscale (The current CEO of Revolt) and Marc Ecko (CEO of Marc Echo enterprises & founder of Complex Magazine).

Among the very prominent figures present at the conference, which included producers Mike Will Made It, Rico Love, and DJ Mustard, Troy Carter (Chairman & CEO of Atom Factory), radio personalities Angie Martinez (Power 105.1) and Big Boy (Real 92.3), Jay Brown (Co-Founder and CEO of Roc Nation), James Cruz (Manager to Sean Combs & CEO at Cruz Control Marketing), David Banner (Artist/Producer/Actor), and Derek Ferguson (Chief Operating Officer at Revolt); The topics of discussion were the real treat, ranging from “The Art of Making a Hit: The Lost Art of A&R”, “From Start-Up to IPO”, to “Behind the Brand: The Women WHO Shape Brands in Music.

The highly anticipated #AskDiddy panel, fortunately, proved to be as entertaining as one can imagine. That entertainment relied solely on Combs’ rather humble way he chose to answer a number of questions asked by intrigued individuals from around the world regarding various subjects via twitter and google chat. The past week weekend was also host to a one-on-one conversation with Scooter Braun and Andre Harrell, in which the audience was gifted in the form of a discussion regarding the changing industry landscape. Attendees were also treated to Michael B. Jordan’s sneak peek of Creed, and Keynotes by Frank Cooper (Chief Marketing and Chief Content Officer at Buzzfeed).

As one would have suspected, the weekend was also host to a handsome variety of musical performances with headliners including, “Diddy” himself, featuring Lil’ Kim, Lil’ Wayne, French Montana, Los, Christian Combs, Busta Rhymes. Further performances included Rick Ross & Nas at the Friday Night Yacht Party aboard SeaFair Miami, and a fantastic array of weekend performers including, but not limited to “Jidenna, Dej Loaf, Travis Scott, Post Malone, BJ the Chicago Kid, Ear Drummer Kehlani, Mike Will Made It, and Robin Thicke‘s fitting performance during the Gala Dinner which closed out the 2015 RMC.

In accordance with the spirit of Saturday evening, Sean “Diddy” Combs presented Antonio “L.A.” Reid (Chairman and CEO of Epic Records) with the Started From The Bottom Award during the 2015 Revolt Music Conference Gala Dinner. This later led to a brief discussion of L.A.’s legendary influence on the musical landscape and the importance of the 2015Revolt Music Conference, which culminated with L.A Reid receiving a deserving standing ovation. 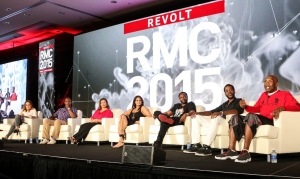 The REVOLT Music Conference’s myriad of sponsors and brands made their appearance known by directly connecting with the Conference’s guests of honor. They also participated in unique and engaging ways in bringing attendee’s experience to the next level. Pepsi brought a new level on connectivity to REVOLT by amplifying the conference’s technology and enjoyment via a RFID wristband; Honda brought attendees, new artists, to watch LIVE from their beachside Honda Stage, while CÎROC served up entertainment through custom mixology classes and pool parties. Newcomers to REVOLT included Bud Light – who had the honor of being the Official Beer of the RMC, Starbucks VIA – whom brought that signature taste of Starbucks and AT&T, who ensured everyone was connected by delivering a mobile app, free Wi-Fi, charging stations, and most importantly an informative experience on the dangers of texting and driving through their “It Can Wait” simulator.

Sunday was subject to the teaming of REVOLT and the City of Miami, in conjunction with AT&T U-verse TV, hosted the first annual REVOLT Film Festival in the Overtown community of Miami at the Black Archives Historic Lyric Theater Cultural Art Complex. The festival was hosted by Eva Marcille (Actress, Born Again Virgin) and closed out the weekend’s activities by showcasing the hottest young international film directors.  Five directors  ̶  Ryan and Sean McIlraith (Flatscreen); Whitney Clinkscales (Hush); Tanner Jarman (High Hoopes); Kevin Rios (Made Of Sugar); and Diego Barrios (Mother’s Heart)  all of which competed for the grand prize. That winner of the film festival happened to be Tanner Jarman (High Hoopes), he will be proceed to be flown to the REVOLT studio in Hollywood for a special REVOLT LIVE tapping, in where his film will be aired on REVOLT TV.  Oscar-nominated director Spike Lee was on hand to offer his thoughts on each of the five films, as well as sneak footage from his upcoming documentary Chi-raq. 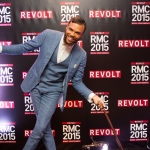 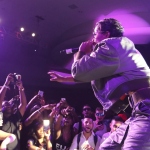 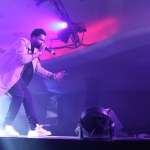 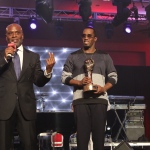 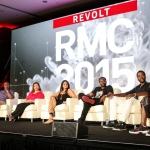 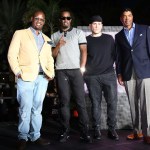 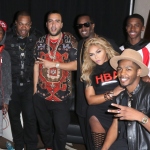