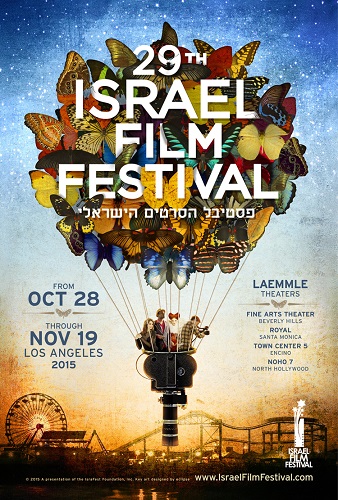 OPENING NIGHT FILM IS BABA JOON, ISRAEL’S ENTRY TO THE 2016 OSCARS FOR BEST FOREIGN LANGUAGE FILM AND WINNER OF THE OPHIR AWARD FOR BEST PICTURE

Aaron Sorkin will be honored with the 2015 IFF Achievement in Film & Television Award at the Opening Night Gala of the 29th ISRAEL FILM FESTIVAL taking place on Wednesday, October 28th at the Steve Tisch Cinema Center at the Saban Theatre in Beverly Hills. The Israeli submission for Best Foreign Film for the 2016 Academy Awards® and winner of five Israeli Academy Ophir Awards, including Best Picture, Baba Joon, directed by Yuval Delshad, will have its U.S. Premiere as the Festival’s Opening Night film that evening. The ISRAEL FILM FESTIVAL in Los Angeles will run from October 28 through November 19, showcasing over 30 new Israeli films including feature films, thought-provoking documentaries, TV series and shorts.

Aaron Sorkin is one of the most talented and successful film and television screenwriters. His film credits include “A Few Good Men,” adapted from his award-winning Broadway production; “The Social Network,” for which he won the Academy Award®, Golden Globe, Critics’ Choice and BAFTA for Best Adapted Screenplay; “Moneyball,” which won the Critics’ Choice Award and New York Film Critics Award for Best Adapted Screenplay and recently “Steve Jobs.” His television credits include “The West Wing,” which earned 26 Emmy Awards throughout its seven seasons, “Sports Night,” which garnered eight Emmy Award nominations, “Studio 60 on the Sunset Strip” and “The Newsroom,” which both respectively earned five Emmy Award nominations.

“We are thrilled to honor writer and producer Aaron Sorkin this year for his impressive individual contributions to the film and television industries.  His iconic films and TV shows have entertained audiences around the world,” says Meir Fenigstein, Founder and Executive Director of IsraFest Foundation, Inc.

Baba Joon was nominated for eight Ophir Awards by the Israeli Academy of Film and Television, winning five:  Best Film, Best Cinematography, Best Music, Best Art Direction and Best Casting.  Now Israel’s entry to the 2016 Oscars for Best Foreign Language Film, Baba Joon is in Farsi and Hebrew, and is the first-ever Farsi-language film to represent Israel.  The film stars Iranian actor Navid Negahban, who is perhaps best known in the U.S. for his role as terror mastermind Abu Nazir on “Homeland.”

Baba Joon is the story of familial conflict among three generation of Iranian Jewish men.  Written and directed by Yuval Delshad in his feature debut, the film tells of an Iranian immigrant in Israel who runs a turkey farm and wants to teach his teenage son the trade and other traditions so that they can live on after he is gone.  After they emigrated from Iran to Israel, Yitzhak runs the turkey farm his father built there with his own two hands.  When his son Moti turns thirteen, Yitzhak teaches him the trade, hoping that he will continue the proud family tradition. But Moti doesn’t like working in the turkey barn; his passion is fixing up junkyard cars and bringing them back to life. Moti’s mother Sarah tries to reconcile between the two, while his grandfather pushes Yitzhak to take a firm hand with his son. Yitzhak takes Moti’s refusal to work in the turkey barn as a personal rejection. Though he loves his son dearly, he makes it his mission to impose the family farm on Moti. The arrival of Darius, the uncle from America, sets off a chain of events that will undermine the familial harmony. Soon enough Yitzhak will learn that his son is just as stubborn as he is. The conflict is inevitable.

Baba Joon deals with the universal difficulty of bridging the generation gap; most importantly, it a story of personal independence vs tradition in an extended family and of the difficulty in honoring and loving in the midst of these conflicts.

To attend the Opening Night Gala or for further information: