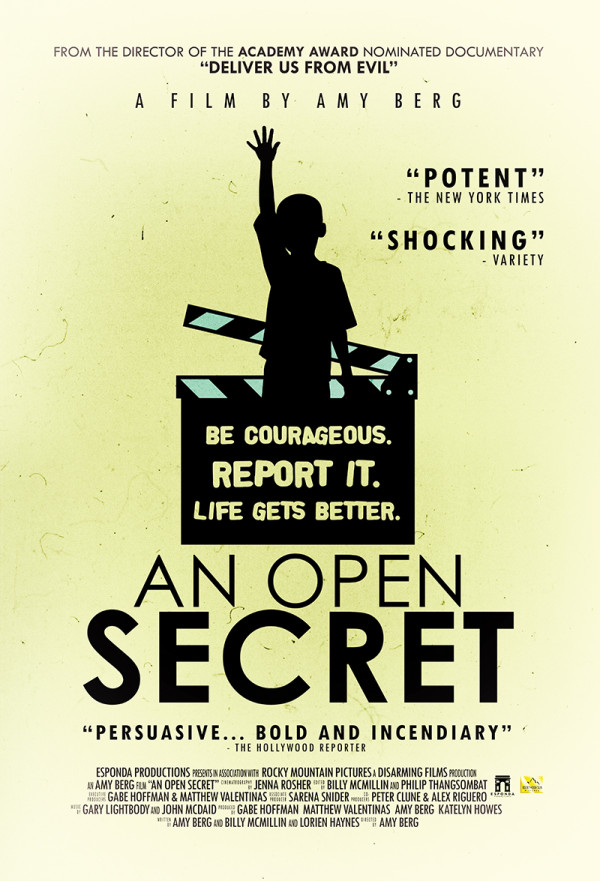 A lot of parents believe they have the most talented child. At the grocery store, mothers are told they have a handsome son that should be in commercials or a beautiful daughter that should model.  Parental dreams of stardom become the child’s dream or vice versa.  They set out to start the process of meeting agents and managers.  An Open Secret is a mandatory watch for parents considering having their child in the entertainment industry. Director, Amy Berg, exposes child sexual abuse in Hollywood. Berg is a critically acclaimed, Emmy-award winning and Oscar-nominated documentary filmmaker. She was nominated for an Academy Award for her documentary Deliver Us From Evil (2006).

Behind the silver screen, a pedophile ring exists. In this documentary, several boys are interviewed; recounting their rapes, stories of their predators telling them it’s “normal” if you want to make it in this business. These boys were exposed to some of the biggest names in the film industry. Surprisingly, female victims are conspicuously absent.

This documentary is a shockingly explosive look at the lives of children and an enticing industry with a system in place that essentially hands them over to sexual predators. Parents blindly trust agents, managers, and publicists to guide and look after their children. The dream of being a movie star along with desperation for fame and fortune lures them to grant access to their children. Because of their aspirations, they are easy prey.

This film faced numerous challenges because it name names.  SAG-AFTRA Threatened To Sue Director Amy Berg Over ‘An Open Secret’ was recently published on Deadline.  There’s a film clip showing Barbara Walters saying to Corey Feldman (The Goonies, Stand By Me) on the View, “You’re hurting an entire industry.”

In the film, Caroline Heldman, Professor at Occidental College states, “We all are a little bad when we don’t speak out.”

An Open Secret opens in New York, June 12 and more cities to come through the summer.

Get connected and support this important film: