Many exhibitors at ArtPalmBeach seemed to have your living room in mind. Unlike the haute wares at ArtBaselMiami, the 85 international galleries at ArtPalmBeach displayed an array of less expensive work by both emerging and well-known artists. For example, limited edition signed, framed lithographs by famous artists, such as Leger, Lichtenstein, Miro, and Stella, cost less than $15,000 and would look dazzling over your couch. 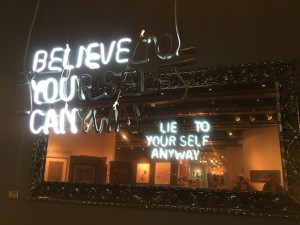 Perhaps the biggest crowd-pleasers were Colombian artist Camille Matiz’ double-think neon installations which offered a counter message when viewed through their ornate mirrors. One paired the messages “Take a selfie” and “Fake a Life.” And my favorite read “Believe you can” which morphed to “Lie to yourself anyway,” when viewed through the mirror.

The annual Palm Beach exhibit attracted a number of galleries who also displayed during ArtBaselMiami. Unfortunately I missed the Hecho en Cuba (Made in Cuba) exhibit by Arte Collective during ArtBasel, but curator Yubal Marquez Fleites brought some riveting pieces from that show to Palm Beach. I was particularly impressed by Edel Morales’ inked “Pájaro pez, mujer, árbaol: la noche, marzo-abril, variaciones” and Abel Masot’s “Voces de Abandono,” in acrylic. Both these young artists live in Havana, and their works have a Renaissance-like visual depth and soulfulness. Also powerful and unsettling, was German artist Hans Aichinger’s Das Zeichen (the sign), in oil. 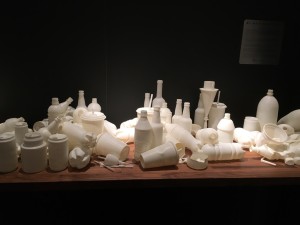 There was ample selection of art masquerading as home furnishings (or vice versa) throughout the fair. I was very absorbed by a simple but stunning tabletop collection of oil painted glass objects, argristocracy 2007-2010, by Pittsburgh-Based Matthew Eskuche. And couldn’t stop smiling at the paint-spilling artist’s table by Colombian artist Jorge Magyaroff.  I also have just the spot for Bostonian Toots Zynsky’s very sensuous Red Vase, $27,000.

Yeah, I can’t afford any of this either, but its fun to look, and fantasize. If you missed the Jan 21-24 Palm Beach exhibit, consider a jaunt to the curated Art Boca Raton Contemporary Art Fair, March 17-21, at the International Pavilion of the Palm Beaches in cooperation with Florida Atlantic University. 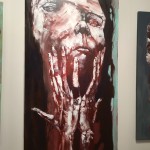 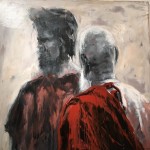 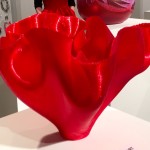 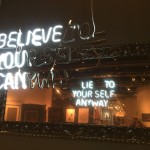 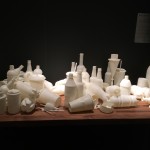