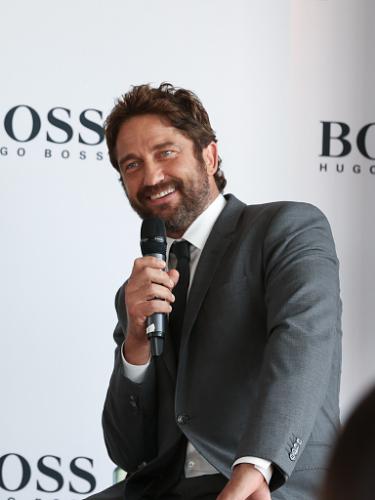 Yesterday, BOSS Parfums launched its new global campaign with the latest face of BOSS BOTTLED and Man of Today, Gerard Butler, at The Standard Hotel in New York. Simon Doonan, author, fashion commentator and Creative Ambassador-at-Large for Barneys New York, interviewed Gerard about the Man of Today campaign, his passion for success, distinctive style and personal grooming. Positive and provocative, the discussion focused on modern day masculinity and the conviction at the heart of the new BOSS BOTTLED campaign – the belief that today’s men are the best they have ever been.

Gerard explained “The Man of Today campaign is inspiring and encourages me to have focus, drive and compassion. I could really relate to the character and traits of the Man of Today.” He continued, “I pride myself on being focused and working hard. I’m dedicated but I also like to live my life in the moment, which is really important for the Man of Today. Being ambitious and striving for success in not only his career, but his whole life. He is multi-faceted and has many different interests, always giving back in some way. He’s chivalrous but also humorous.”

Dressed sharply in a two button grey Boss suit, Gerard also spoke about his longstanding relationship with the brand. “I’ve used BOSS BOTTLED for a longtime now and it is a timeless classic,” he said. “I love the fragrance and the smell. The scent is strong and unmistakably masculine, but also versatile. BOSS BOTTLED lends itself to different occasions, and allows me to feel different things. I can wear it during the day, at night or going to a sport. Like the ‘Man of Today’ it’s multi-faceted.” 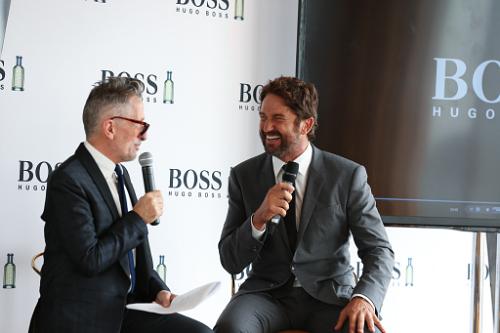 Personifying strength, chivalry, charm and the complexity of modern times, Gerard Butler perfectly mirrors modern masculinity and embodies the values of BOSS BOTTLED. The global television ad was shot by renowned American film director Anthony Mandler, with the print and PR images captured by famed American photographer Cliff Watts. The campaign highlights the path of the Man of Today and the values by which he lives his successful life.

BOSS BOTTLED – Over 15 Years of Success

Dynamic and timeless, the BOSS BOTTLED fragrance has been guiding men to success for more than 15 years. A strong, respected pillar of long-lasting success since its launch in 1998, BOSS BOTTLED has continually responded to and epitomized contemporary manhood with its elegant, spicy accords and timeless flacon design.

With its complex structure, BOSS BOTTLED is as versatile and rich in contrasts as the Man of Today is. The fragrance has achieved what only very few fragrances can – status as a timeless classic. Years of heritage and success convey a sense of truthfulness and dependability that is of high value in today’s fast-paced world. The subtle composition of extraordinary ingredients, which are still contemporary masculine notes today, and the addition of vanilla, traditionally an ingredient in female fragrances, was regarded as revolutionary at launch. The fragrance remains a trendsetter in male perfumery today.

Sharp with a warm woody base, BOSS BOTTLED is an unmistakably masculine scent for today’s man. Fruity and citrus top notes of apple, lemon and plum, balance with a floral and spicy heart, dominated by geranium, with the added spice of cinnamon and clove. Warming base notes of sandalwood, vetiver and cedarwood are offset by vanilla. Much like the Man of Today adds a perfectly tailored suit to cement his groomed look, the vanilla refines the fragrance, creating a sophisticated wrapping around the remaining ingredients. The contrast of the masculine spicy wood notes and the unconventional fruity vanilla notes intrigues, but never goes off balance. The result is a fragrance which remains as contemporary and relevant today as it was at launch – BOSS BOTTLED has truly stood the test of time, becoming an established part of the Man of Today’s daily routine.

The clean, sleek design of the glass flacon represents the classic BOSS ideals of elegance and style; much like a striking suit, the flacon is a truly captivating shape. It has been designed to be uncompromisingly masculine with clear forms, distinct lines, and without any need for unnecessary decoration. Its refined simplicity is the embodiment of sophisticated understatement and functional elegance. BOSS BOTTLED is a timeless classic, for men in the past and the Man of Today.