Camron is pleased to announce its representation of MARTHA STURDY. 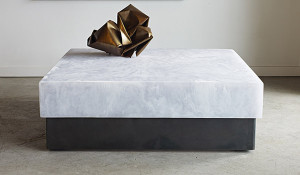 An artist and designer born and raised in British Columbia, Sturdy has always been guided by the elements. Salvaged cedar, brass and steel form her sculpture, wearable, wall and standing pieces, while resin forms much of the MARTHA STURDY collection of furniture, table top and design products. Sturdy’s creations are hand-worked using traditional methods in the workshop she founded in 1978, in Vancouver.

Never delicate, but often pared down, Sturdy’s work finds a balance in its weightiness and a resolve in its proportion, each piece an investment in aesthetic and in function. 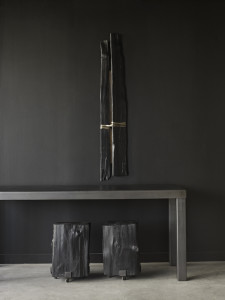 Sturdy’s works are constantly engaged in a conversation of scale. Having started out with the limited resources of a young art school graduate, early on, Sturdy was forced to adapt the proportions of her vision, and so began working in a scale accessible to her — wearable maquettes.

Sturdy went on to gain international notoriety for her influence in functional art and design. Her iconic wearable sculpture evolved into further series of sculptural home furnishings.