It’s been two years since I sat down with artist, Michael Bell.  I recently spoke with him, discussing his Ted Talk, healing, art, education and his activism. His organic candor is intriguing.

This is what he had to say:

How did the Ted Talk happen?

My TED talk has actually been years in the making. It’s a narrative that’s been shaped over the course of my career while giving numerous artist talks, workshops, keynotes and interviews, like this one with you. And one day, in the summer of 2015, I saw a TEDx event in Paramus, New Jersey pop up on one of my social media feeds. I immediately emailed Ellen Feig, Organizer of the event. I asked her if she was still in need of inspirational speakers and if she felt I’d be a ‘good fit?’ After reading my Bio, accomplishments and viewing a recent artist talk I gave to SUU for their televised Arts & Insights Program she responded back with, “Wow – this is perfect!!! Would you be willing to speak on March 8, 2016? I love the idea of art as a means of narrative.” And with that, the rest, as they say – is history.

The talk itself couldn’t have gone better. The audience loved it, and Ellen was thrilled with how well it was received! Through it, I was able to shed a new light on my process of painting, introduce everyone to my innovative “31 Nights” project, and share some never-before-told stories surrounding my life and my infamous clientele base, including the recent painting I did for John Gotti Junior, for the cover of his new Shadow of my Father book, which is now being made into a movie with John Travolta playing the role of the Dapper Don, John Gotti, Sr. 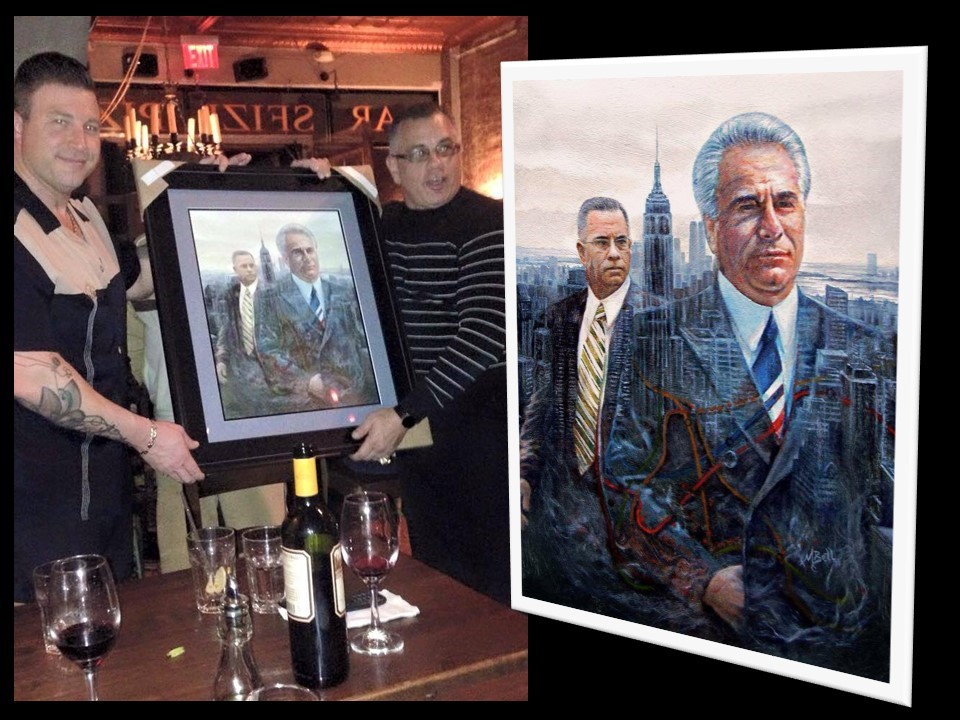 Do you believe art can be transformative and heal?

I believe art can definitely be transformative. I’ve seen art help heal wounds that run deeper than most could ever imagine, for me, and for kids too. I’ll share two stories, the first being mine.

I worked through the personal tragedy of losing my sister shortly after birth, which sent my mother into a dark tailspin of depression with a piece I call my “Relics of Childhood.” It took the form of an old wooden jewelry box that I painted red and mounted a miniature wooden rocking chair to the top, representing how my mother used to just sit in a rocking chair and just rock after the tragedy. Inside the drawers, I stuffed it with baby clothes, the tags still on them, representing my sister. I then took photographs of the swing set that I used to swing on as a child. I printed them on the rough side of sheets of photo paper so that the ink bled, giving them the fuzzy look of a faded memory. I mounted the photos to cardstock, strung chains through the two top corners and then screwed the chains into the inside of the bottom drawer of the piece, so when you pull out the drawer to look at the stack of photographs mounted to chains and let them hang, the stack of photos actually swing, just like a swing set. Inside the top of the red box, which lifts up, I placed nine birthday cards, partially sealed, with the word “Amanda” written on the outside of the envelope. Inside the envelopes I re-created what I discovered was my mother’s annual ritual of writing out birthday cards to my sister, sealing them up and hiding them away in a drawer. This was me dealing with what life had thrown my way, by creating something I felt could be transformative in the way it could spark a conversation, and maybe even help others to heal and open up about their own childhood experiences. 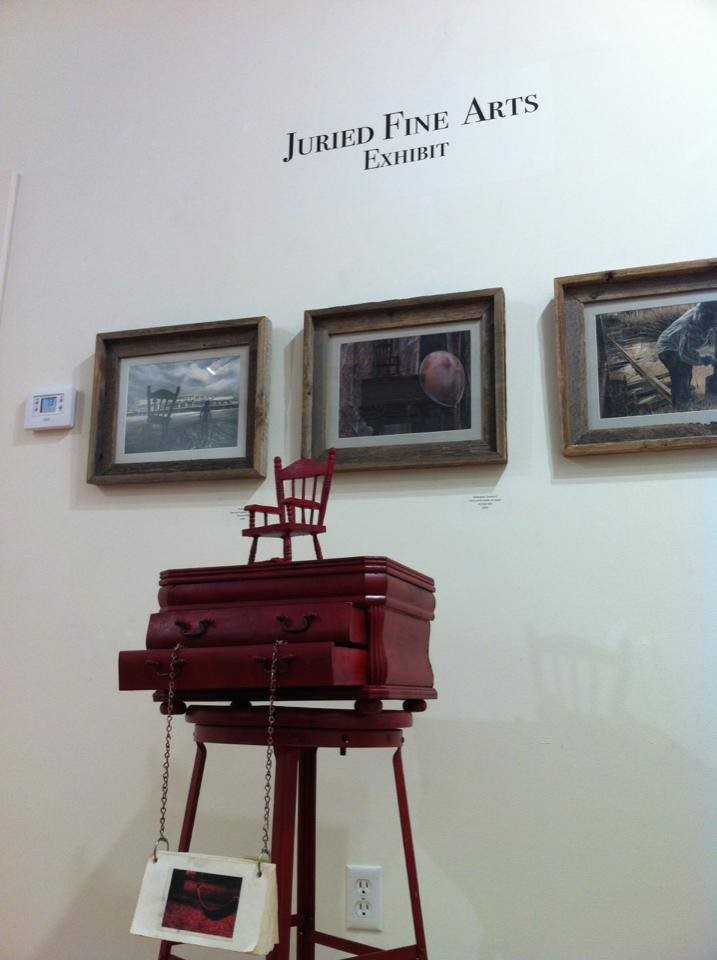 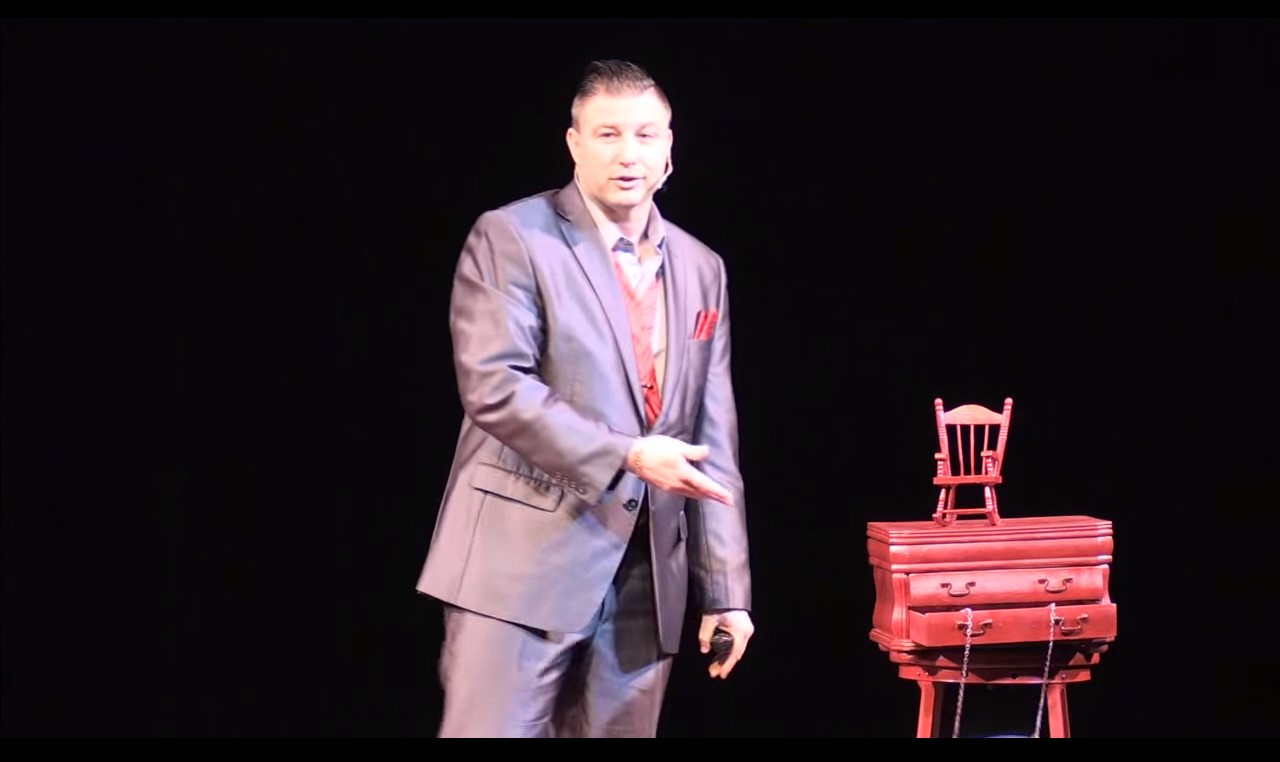 Story two is about Kelly Carroll, a young, teen artist I’ve been mentoring over the past two years, and how her art helped her overcome one of the greatest tragedies of all, the loss of her own childhood. In her own words, “Childhood ended the day I walked down a cold hospital hallway, where my mother and father died within the time span of two months shortly before my sixteenth birthday.” She explained to me how it’s “the kind of loss that shifts you, unearthing things about yourself that you wouldn’t have known otherwise, molding you into different forms of yourself and it can change you completely.” She expressed this through a photograph entitled “Royal.” This would become one of many in a larger body of self-portraits that helped her to work through what words often failed to accurately describe, like in “Storm Approaching,” where she’s wearing a large winter coat outside, standing against the wooded backdrop of what was once her family’s home and said of this photograph, “Loss can bring a cold, brisk breeze through your life, picking up and carrying away elements that you thought were the substance of your character,” Kelly would go on to earn 11 Regional Scholastic Art & Writing Awards, including 3 Gold, 5 Silver and 3 Honorable Mentions and scholarships totaling $168,000 under my tutelage. She even made a Cameo in my own art; posing with me for a Bonnie & Clyde painting I was commissioned to create. Beyond all this, Kelly is so special to me for what she’s had to go through to get where she is today. Her creativity comes with a lot of courage. Will it heal her? Only time will tell. But her courage to go there, to places where others would not, will give her the kind of resilience that I believe will take her far in life, and in art. 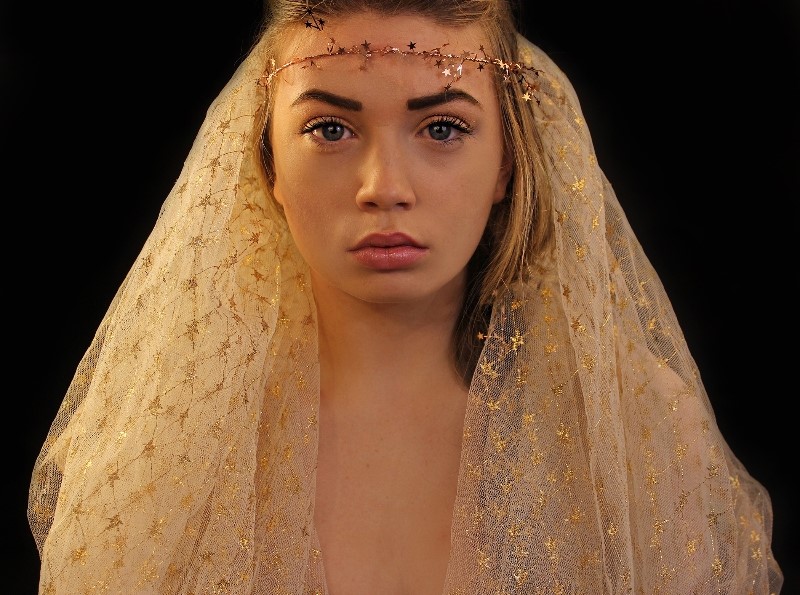 “Royal” (above) and “Storm Approaching” (below) by Kelly Carroll 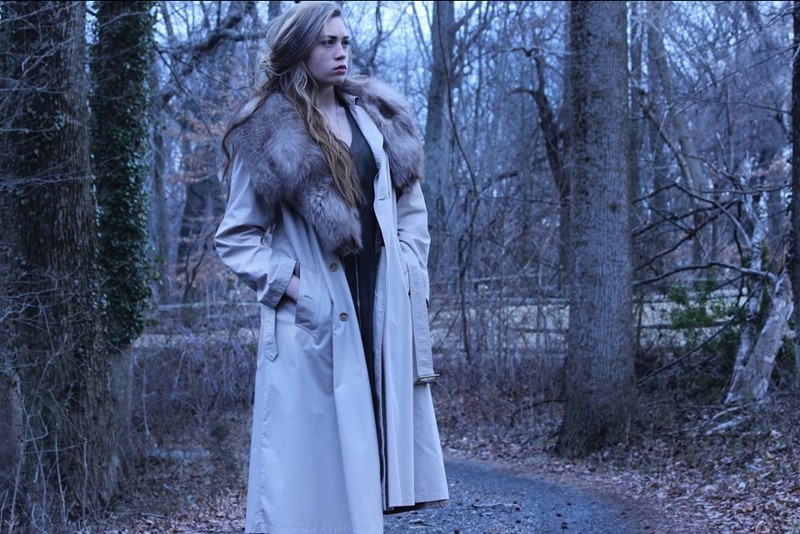 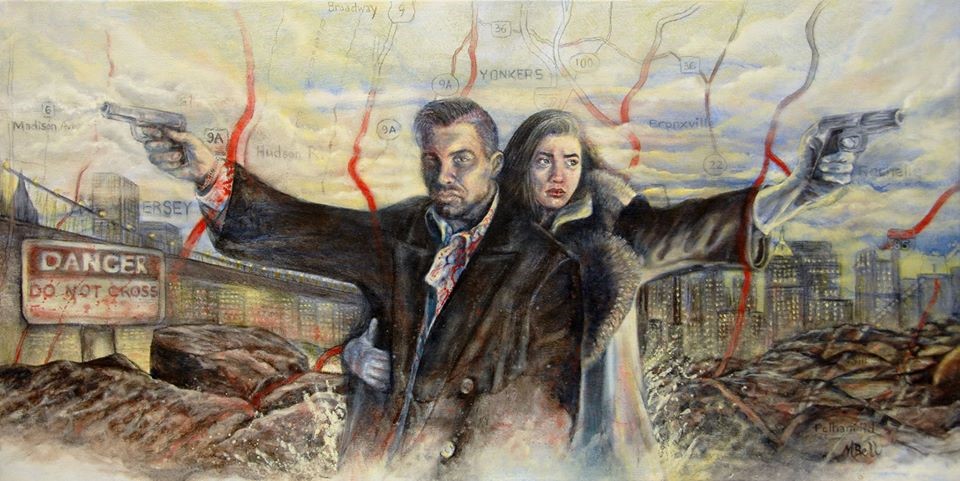 What if the line from your life to your art is not straight but abstract?

Melissa, I always love sitting down for an interview with you because you do your homework, and always seem to hit on something that strikes an emotional chord with me. Up until now, I’ve been giving artist talks throughout the country on how to “draw a line from your life to your art that is straight and clear.” But, one year ago to nearly the date, our son was diagnosed with a form of autism once labeled Asperger’s, specifically Autism Spectrum Disorder, coupled with ADHD. So, while most people can visualize their dreams to make them into reality, and find it natural to work from a personal place in order to draw that metaphorical line from their life to their art, for our son – it’s all very different – very abstract.

Temple Grandin, a well-known autistic author, speaker and professor of animal science at Colorado State University has described this way of thinking as, “piecing together a jigsaw puzzle while having no idea what the picture is supposed to be of.” While I’m paraphrasing here, and simplifying down a much more complicated way of thinking, learning and visualizing it forces my wife and I to examine new ways of teaching and constructing narratives with our son, and with our own lives. To try and answer your question, which is a deep one, I think the answer lies in being able to find ways to “categorize” the things in the “line” that you’re trying to connect between your life to your art, especially if the line is not so straight and clear, in order to better understand our lives, what we are actually creating, and why.

Well, after that last question, I’m sure you can guess I’m now an Autism Activist, fighting for our son, in every way possible. I’ve done autism benefits, donating paintings for the cause and red carpet unveilings with celebrity friends of mine from shows like The Sopranos, The Godfather and Goodfellas. Recently, I’ve been partnering with organizations that champion Autism Awareness, including boxing venues, which has proven to be a sport that’s given our son a newfound confidence and outlook on life. AutismSpeaks just did an incredible article on our son that went viral entitled, “The moment my son with autism said, I believe in me”. 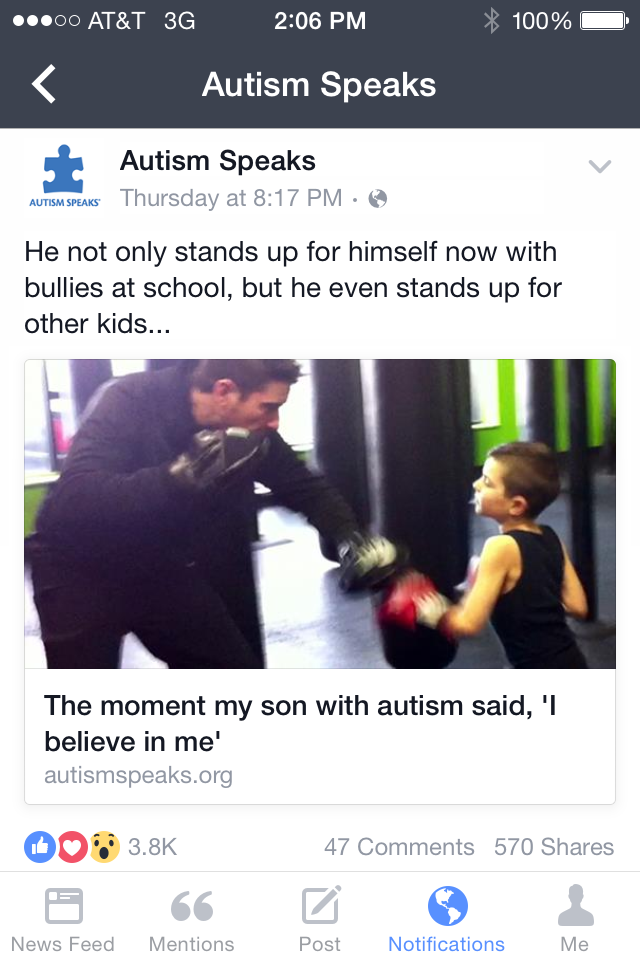 I’m also a Domestic Violence and Anti-Bullying Activist, and was awarded the Los Angeles Good Shepherd Community Service Award for my contributions to this arena back in 2005. I still, to this day, over a decade later donate hundreds of handmade sketchbooks annually to the Good Shepherd Shelter, which handles some of the most extreme cases in all of Los Angeles, in order to help children work out what life has thrown their way artistically, in their new handmade visual journals.

Lastly, I help Carol Todd light the world up purple every year on October 10th in honor of World Mental Health Day and for Carol’s daughter, Amanda Todd, the Port Coquitlam, B.C. teen I painted a portrait of for Carol back in 2012 after she tragically committed suicide after years of being bullied.

Tell me about your screenplay.

My first screenplay, “Ticket to Ride” (TTR) was based on my “Ticket to Ride” painting series. I would later elaborate on this conversation visually with the completion of my “Carnevale” painting series, which became the prequel to TTR. All paintings are very narrative, very cinematic. I felt that it could be a remarkable experience to exhibit both series simultaneously at a museum large enough to house both, and have a film accompanying the works. I think it’s a concept that’s incredibly marketable, but I haven’t found the right museum, or the right producers yet. But they will come when the time is right.

This journey into screenwriting began after I returned from a star-studded Ticket to Ride paintings launch party in New York City back in 2008. Some of my Sopranos clientele kept talking about how cinematic my paintings were, and how I’d be a natural to direct my own film. One actor friend, John Fiore (The Sopranos, Brotherhood, Law & Order), said they are “painting noir at its finest.” That I painted each scene “so visual he could read them like storyboards for a movie.”

Since TTR, I’ve finished a second screenplay called “Kingsland,” which is a spin-off of TTR, and is written as the pilot for a true crime television series, as opposed to a full-length feature film.

I’ve also been working on two other books this past year. One is a novel about my life, juggling two lives in both Art and Education. The other, a fine art book about my “31 Nights” Project to help others unlock their own creative art-making processes. 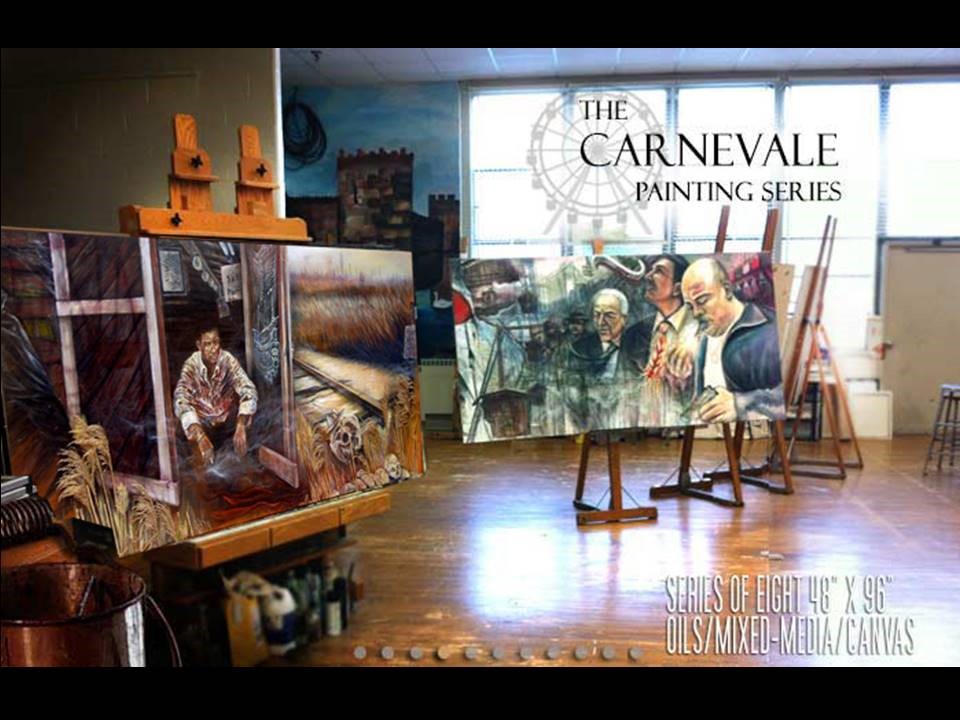 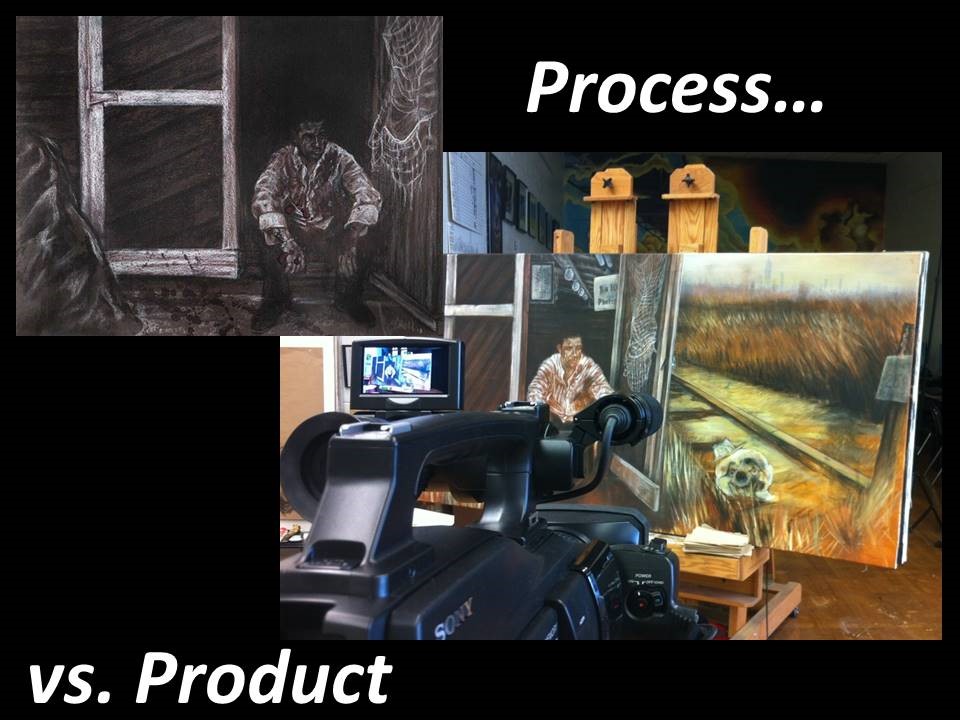 What do you want your legacy to be?

In the art world, I want my legacy to be pioneering the Visual Journaling movement, through my innovative approaches to help other artists bridge the gap between their processes versus their final products. In the world of education, my legacy is well documented for what I’ve given of myself to the youth of today, as a three-time national award winning educator who chairs one of the best programs in the country. My legacy will also live on through ArtQuest, which, as you know from our last interview, is one of the largest professionally juried, nationally sponsored art exhibitions in the country that I created back in 1998.

What super power do you wish you had?

Wish I had? Melissa, I already have super powers! Anyone’s that’s ever sat in front of one of my larger-than-life sized paintings, or that has ever sat in on one of my workshops or keynotes knows what it is.

How would you use it?

How I use my gift? I inspire. Often, I try and inspire others to believe in themselves, even when they feel they can’t or won’t.

“I believe in me” is my motto. “I have no other choice.” – Michael Bell