The Jack Brewer Foundation (JBF), in collaboration with the Permanent Mission of Grenada, India, Italy, Jamaica, Israel, and Slovenia and Bobby Kumar, Chairman of Friends for Good Health, descended upon the United Nations General Assembly April 6th, 2016 to host the annual Sport 4 Development Summit, fostering ongoing dialogue as to how athletics can be harnessed as a catalyst for sustainable change across borders. Declaring the occasion International Day for Sport for Development and Peace, JBF seeks to promote human rights, social equilibrium, and economic development as a platform not only for continuing responsiveness but enrichment, for the world’s most underserved populations. 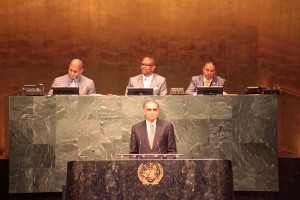 Shortly after the conference got underway, several spokespeople from JBF’s Global Ambassadors Program, including National Football League (NFL) defensive end Carlos Dunlap and ‘Orange is the New Black’ actress Dascha Polanco, took to the podium, each delivering moving speeches chronicling their personal experiences serving the foundation. The program seeks to mobilize professional athletes-  current and former, celebrities, and prominent delegates as agents of change to deploy its endeavors both locally and abroad. From working ceaselessly to alleviate the negative cycle of poverty to reconciling the encumbering gender gap, activists teamed up with U.N. representatives to leverage their resources to nurture the world’s most neglected communities. Other attendees who came out to champion the cause included Hill Harper, Tommie Harris, EJ Manuel, Sergio Brown, Sidney Rice, JT Thomas, Clinton Portis, and Santana Moss.

Seeking to “empower from within,” cultivated synergies between leaders in the sports community, NGOs, and benefactors provide the momentum to make food security, education and cultural exchanges, medical aid and disaster relief, and peace-building initiatives accessible in ravaged, distressed, and poverty-stricken nations. By becoming global citizens on the ground in Haiti, Jamaica, India and more, JBF’s enduring mission is propelled to the forefront of the organization’s impactful work, raising awareness, meanwhile marking a paradigm shift towards social consciousness on a universal level.

The forum coincides with the kick off of JBF’s annual pilgrimage to Haiti with their 2016 Global Ambassadors Delegation from April 7th-11th. Headlining a full itinerary of immersive philanthropic events alongside esteemed organizations like The Haiti Initiative and Project Medishare, goodwill ambassadors will drive ongoing projects already in effect, including:

The week-long labor of love culminates with a celebrity softball match boasting an impressive roster of NFL legends who share the same spirited humanitarianism. Other notable figures slated to attend include NFL Pro Bowler and Man of the Year Winner Carlos Dunlap, 2015 Miss Puerto Rico Genesis Perez, co-star of the award-winning “Orange is the New Black” Dascha Polanco, as well as Super Bowl Champions Reggie Bush and Jeremy Shockey.

In an echoing display of solidarity for the cause, JBF’s efforts off the field continue to channel the art of sport as a conduit for change in the global arena. For more information about the Jack Brewer Foundation or to get involved, please visit www.jbfworldwide.org. 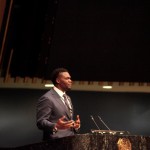 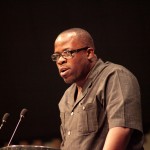 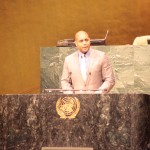