One Big Home is a thought-provoking documentary that requires introspection upon seeing it. This film explores the complexities about segments of society insatiable greed for the biggest house and materialism. The film’s powerful imagery shows American shorelines diminish due to planned communities developed by land snatchers. Land lust disease has infected the United States like malignant cancer. This has always impacted indigenous people. The filmmaker speaks with a Wampanoag tribe member who has not assimilated. What this film clearly demonstrates is that no one is safe from gentrification.

I spoke with the filmmaker, Thomas Bena who was incredibly gracious.

What transpired that cause you to do this documentary?

After graduating with a degree in marketing and working for a time in the business world, I grew disillusioned with it. So I spent the next decade traveling around the world. To fund my addiction to the road, I’d work odd jobs back in the U.S. and then, when I had a few thousand dollars saved, I’d be off again.

My goal was simple-see the world and learn about myself.

During my travels, I can’t tell you how many times I’d hear, “You should’ve been here twenty years ago. It used to be such a special place but then it got discovered. People loved it to death.”

When I landed on Martha’s Vineyard, I found small towns and an eclectic mix of educated tradespeople, artists, Native Americans, and travelers. The sense of place was unlike any that I’d encountered. Instead of strip malls, franchises, and billboards, there were stonewalls, rolling hills, and incredible beaches.

On the first day that I arrived I landed several jobs and it wasn’t long before I was working seven days a week. My main gig was carpentry. At first, I really enjoyed the work, but over time I found myself working on larger and larger homes. We’re not talking about acreage homes which people often hire builders for when they want to have their dream home made from scratch (Click Here to learn more.) These were trophy homes, mansions even! The larger the home, the more my sense of uneasiness increased. And the fact that they were often third or fourth homes seemed incongruous with their enormous size. They looked more like bus stations or hotels, not summer cottages.

The houses were heated year round and I found the waste of resources shocking and depressing. Not only did the “starter castles” dwarf the cottages and historic homes they replaced, they seemed out of keeping with everything that I love about Martha’s Vineyard. I felt like I was ruining the place that I wanted to call home.

And that is why I took off my tool belt and picked up a camera.

How has making this film changed you?

The film I set out to make is NOT the film I ended up making. I started out wanting to say that said big houses were bad. Along the way I realized that there was so much more going on than that…and so much more at stake than I originally realized.

In the twelve years that it took to make the film, I’ve learned that if I want to have a meaningful effect on my community I need to dig deeper than anger. In that way I’ve become a bit more compassionate and understanding. But I also learned that I can’t walk around trying to make friends, I need to speak my ideas, be curious, listen, and look for opportunities to build bridges between people and concepts.

Why were you offended by the massive homes?

The extra-large trophy homes offend me because I think they are so utterly wasteful. I was raised with the well-known and simple concept, “If you leave the room turn the lights off.” Many people are looking at how to downsize to a smaller home in order to cut energy bills or just to reduce the amount of wasted space, like when children move out, yet here people are living in stark contrast to this idea. So building houses that dwarfed the size of the home I was raised in, that would be heated and empty for all but a few months a year, felt wrong to me. Couple that with the fact that Dukes County, which Martha’s Vineyard is a part of, is one of the poorest counties in the state of Massachusetts and it just didn’t make sense to me. I love where I live and I felt like we could be a doing better job of caring for it. People don’t want to be paying over the odds for energy bills that they can’t help because of large spaces that aren’t really needed. However, in some homes this is the case, that is why services such as Gexa Energy plans and ones similar to it, are there for people to save as much money as they can with their energy output each month.

What qualifies as a trophy home?

You know it when you see it. And of course-it is entirely subjective. We passed a bylaw that starts to limit house size at 3,500 square feet. South Hampton, NY passed one at 25,000 square feet. 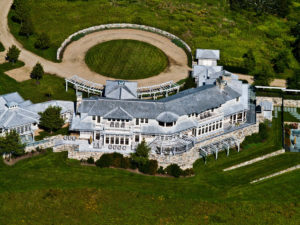 I felt guilty when tearing down the old house and building a 3,000 square foot new house. The new house is more than twice the size of the house I was raised in.

So why did I feel guilty? Well, first off I’m curious and I’m a questioner-so that is part of my makeup. But I also believe that the guilt I felt results from being raised by people who came to this country with literally nothing-one suitcase. My mother was only 11 when she arrived. My grandparents and several aunts and uncles, never learned to speak English or to read and write. So I feel a strong connection with people who struggle to make ends meet and who get by with not many luxuries in their life.
My wife says that I need to learn that it’s okay to have. And I think she’s right. But at times I still struggle with it. Like the unidentified woman in the large home says in my film, “Why do I get to have all of this? Why can’t the guy out there digging a trench have it too?”

Some would dismiss it as “survivors guilt” and I’ve often referred to it as such. But I think it could be proof of our evolution as humans. I believe that at some level we feel, inside of our bodies and hearts, when others suffer. And this isn’t something to be repressed; we can work with that to make all of our lives better. 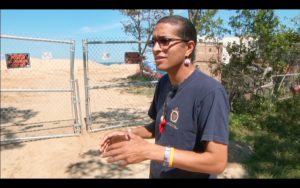 What makes a house a home?

That’s funny that you would ask that. For several years, that was the film’s working title! I’ve thought about that for a long time and asked all of the film subjects that question. Most said the same thing-love. One man said, “Truth”. Mike Wallace said, “You know” and point to the center of his chest, “it’s in here.”

What were the results of the Environmental Impact Reports?

I hired three researchers to try and find out how much energy Mcmansions use and they came back empty handed. Sure they had a few bits of information but nothing that hit the nail on the head.

When I did try to insert the bits of information we had gathered into the film it really stopped the film dead in its tracks. I imagined viewers debating the figures instead of feeling the story progress.

I knew then that I wanted to make a personal film, not one filled with facts and figures. There is a place for that type of film but I wanted the viewer to feel. I wanted them to think about and question their behaviors and beliefs. So I figured that I’d spend my time, money, and energy digging into my backstory and those of my characters.

I wanted to make a simple and honest film that asks hard, complex questions.

I want to discuss conservation measures such as any protected habitat. Are you aware of any there?

Yes, but the subject of conservation measures and protected habitat is a huge issue that I consciously chose not to get into.

I did try to insert scenes that discussed water quality, conservation of habitat, and biodiversity. But whenever I did that, the film lost its steam. I could feel the viewers begin to disengage with the already complex and nuanced story.

At one point, to make more room for more stats and to cover other issues, I took my story entirely out of the film. I really didn’t like that cut and that is when I made the decision to make this an emotional film and to accept the fact that I couldn’t address every issue out there.

Of course, we do make intellectual arguments but the editors and I worked really hard to get people to feel-through the use powerful images and the personal stories of the characters.

One of my favorite documentary filmmakers Alan Berliner watched an early cut. His reaction was, “Make it about one thing”. And that is what I hope I’ve accomplished. This film is about standing up and working for change in your community.

How do you see yourself now? A. A conscious carpenter? B. Activist? C. Filmmaker?

I see myself as a producer/director and I still run the Martha’s Vineyard Film Festival, which I founded seventeen years ago.

Along with a terrific staff, we are getting ready for our annual event on March 16-19. We program films all around the island, indoors and out. We have free filmmaking classes in the schools and a summer filmmaking camp. We’re also hoping to buy land and build a barn for our events and programs.

Are you taking this movement on the road?

Yes–at the premiere in southern California, I was expecting to be tossed aside as the “east coast hippie guy” but the audience was stunned. One by one people shared stories about their communities and how helpless they felt in the face of rampant development. From age 20-75, people told me they wanted to do something but didn’t know how.

This has been my experience at most of my screenings.

I really hope my film will show that anyone can affect change where they live! As fisherman and film subject Chris Murphy says, “You don’t know what will happen, you just need to get off your butt and get in there. And the second you do, you begin to affect how things work.”

What is the call to action?

The call to action it to roll your sleeves up, get your hands dirty, and get in there. We have a lot of work to do to bridge the two sides in this country. We need to work together and it starts now, with each of us. Stand up. 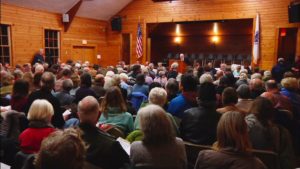 One Big Home is making its way all over the nation. This upcoming week, the film will be shown at the Environmental Film Festival, at the National Building Museum in Washington, DC.

Connect with One Big Home on social media: