On Sunday, May 15th, legendary musician Phil Collins and Orianne Collins hosted the Third Annual Keep Dreaming: Brunch on the Beach at the Faena Hotel in Miami Beach to benefit the Little Dream Foundation. Established in 2000, the Foundation fulfills the dreams of young aspiring talent who do not have the means to achieve their goals while also supporting young talent, either handicapped or not, within the music, art, and sports arenas.

The morning began with a cocktail reception in the newly opened Faena Theater and featured a silent auction. Guests sipped champagne as they viewed silent auctions items that included memorabilia on the late artist Prince, stunning jewelry pieces, autographed sports items, and even a framed photo of Donald Trump.

Guests were then asked to enter the theater to enjoy special performances by the 2016 Little Dreamers and the WYK Band featuring Nic Collins (son of Phil Collins). The Little Dreamers opened the show by singing “You Raise Me Up” as a group. Then later sang amazing renditions of songs such as “Tell Him” by Celine Dion and Barbara Streisand, “FourFiveSeconds” by Rihanna, Kanye West, and Paul McCartney, and “I know what you did last summer” by Shawn Mendes and Camila Cabello, among others.

The Little Dreams Foundation “Dreaming On The Beach” brunch and performances 2016 at the Faena in Miami Beach on May 15th, 2016. (Photo by MagicalPhotos.com / Mitchell Zachs)

“It’s lovely to see these kids sing,” said Phil Collins. “Some of them are quite amazing for their age.”

The band WYK (which stands for What You Know) closed the show with original songs that included electrifying solos. The self-described alternative rock, funk band is made up of Nic Collins on drums, Yannick Waingarten on bass, Joey Rodriguez on lead guitar and Nick Acquilino on lead vocals.

After the show, attendees dined at PAO by Paul Qui. Helmed by the James Beard Foundation award-winning chef, guest were served a delicious three-course meal that started with a local burrata salad with Campari Tomatoes “on the vine”, garden pesto, and toasted pine nuts. For the entrée, guests had the option between stone crabs with mustard sauce, romaine spears, and cucumbers or pan seared chicken breast accompanied with roasted fingerling potatoes, wilted spinach, and chicken jus. The decadent meal ended with a perfectly sweet and tangy key lime tart. 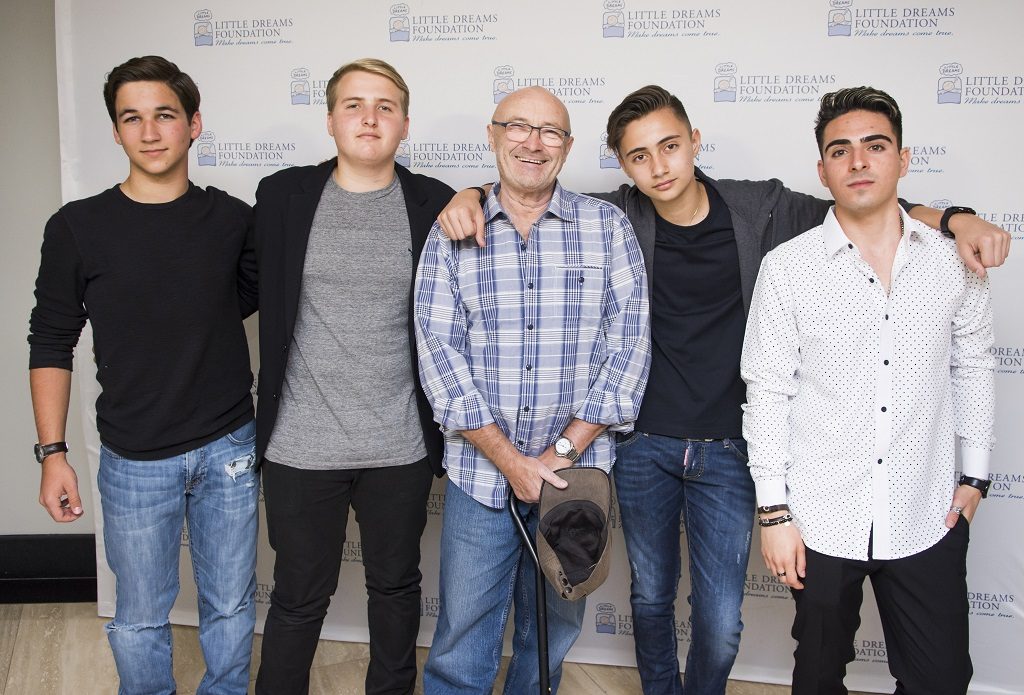 The Little Dreams Foundation “Dreaming On The Beach” brunch and performances 2016 at the Faena in Miami Beach on May 15th, 2016. (Photo by MagicalPhotos.com / Mitchell Zachs)

Both Phil and Orianne were radiant hosts throughout the entire brunch; they engaged with each guest, answered press questions, took photographs, and ensured that everyone was having a good time. Both expressed their passion and love for the foundation and the difference it’s made in the lives of children in Europe, Africa, and the US.

With afternoon so focused on music, and in the presence of large photos of Prince, it was hard to not ask the Grammy-winning artist on his thoughts about the musician’s passing.

“What a loss. So sad. What bothered me the most was the media frenzy behind it,” shared Phil Collins as he recalled seeing the news on TV and how it was broadcasted. Phil, who had nothing of words of praise and considers Prince a legend, even joked about not coming close to him or others like Stevie Wonder.

But of course, there is no truth in that.

Phil and Orianne Collins are traveling to Switzerland within the next few weeks to host their Little Dreams Foundation Gala there and additional events will happen throughout the rest of the year.

“Orianne always has lots of things up her sleeve. I get told at the last minute I’m actually the poster boy.”

For more information, to make a donation, volunteer or refer a child, contact Little Dreams Foundation at 305-951-2757 or visit www.ldf.cc