“I would rather make a picture than be one,” said Lee Miller, a top Vogue model, when she ran off to Europe in 1929 to elbow her way into an apprenticeship with surrealist painter and photographer Man Ray. She became Man Ray’s student, model, collaborator and lover for many years and took charge of her own image, photographing herself and other models for Vogue. Her most searing fashion photographs were taken in London, during the blitz, where the Vogue offices were bombed three times. Miller took her model in a designer suit out into the rubble of the bombed streets, and those photographs, published in the magazine before the U.S. entered World War II, were an important plea for American help.

A wide ranging array of Miller’s art, journalist and fashion photographs are on view at NSU Art Museum, Fort Lauderdale, until February 14, 2016. At the exhibit opening Miller’s son Antony Penrose and her granddaughter gave a frank and lyrical narrative of Miller’s life, while a dazzling variety of archival photographs were shown on the screen. Penrose, who discovered hundreds of his mother’s photographs after she died, is now an emissary of her reputation.

Miller’s early photographs were surrealistic in style, cutting patterns and snippets from images of herself, as did Man Ray. Together they experimented with techniques. Lee took a photo of Charlie Chaplin with lights on his head, and one called “Exploding Hands” of her hand refracting light as it opens the door to a fancy store. And after a day on a commercial shoot of a surgery, she asked for the breast severed in a radical mastectomy, and photographed it on a fancy dinner place setting, in an upsetting image that her son interpreted as a feminist gesture against the commodification of Miller’s body.

In London, after D-day, Miller teamed up with Jewish war photographer David E Scherman, and together they travelled with the Allied Army, with Miller as war correspondent and photographer for Condé Nast. Some of their photographs are surrealism-come-to-life. Miller and Sherman photographed each other in Hitler’s bathtub in Munich.

Miller photographed the liberation of four concentration camps, and a horrific photo of Buchenwald was published in Vogue with her story “Its important that you believe this is true.” Although Miller later married artist Roland Penrose and had a son, the war experience was traumatizing and she did not use the camera for the rest of her life. Disabled by depression and alcoholism, she threw herself into gourmet cooking. Her son remembers her serving blue spaghetti. 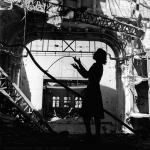