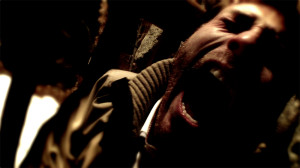 This film is a dark, intense psychological thriller.  It vividly demonstrates that the mind is powerful.  Nothing is what it seems at all.  The guilt from lying drives Peter (Fisch) insane. His uneasy lies to the mind.

Peter (Fisch) is a rising movie star.  He has it all: wealth, fame, picturesque home and a beautiful pregnant wife, Julie (J’aime Spezzano). When the couple’s two supposedly best friends, Jack (Tucker) and Lauren (Michelle Nunes), join them at their new mountain mansion for Peter’s birthday, jealousy, secrets and paranoia run wildly rapid.

Once they stop being polite and begin saying what’s deep within, their phony smiles decompose, as the two couples grow increasingly hostile towards each other.  They indulge in alcohol and drugs to cope with their state of being including Peter’s expecting wife.  When Peter’s old frenemy, Shawn (Isaac Nippert) shows up unexpectedly, Peter panics because Shawn knows the story that Peter wants buried.  The more Peter desperately tries to maintain his composure, the faster he is thrust into mental anguish and driven to do the unthinkable.

What is the actual truth or an illusion is a conscious choice Peter has to make.

Uneasy Lies the Mind is now available to rent or own on iTunes, Amazon Instant, Google Play, Vudu, Redbox Instant, and most cable operators across the United States and Canada.

Here is the trailer: